“Opportunities to succeed as an academic in the areas such as computer sciences, are not readily available to everyone,” says Dr. Frederica Darema (M.S. PHYS ’72). “This fund enhances opportunities to showcase some of the most talented academics and researchers, those who may not have such opportunities otherwise. The more we lift up these excellent junior faculty, the more we will be able to encourage women and people of color to pursue an academic career in computer science.”

The lecture series is designed to encourage women and individuals from under-represented groups to pursue academic careers in computer sciences, and to focus on providing speaking opportunities for tenure track assistant professors (or the equivalent) at U.S. institutions in their fourth to sixth year. Lectureships may also be awarded to exceptional junior researchers in U.S. federal or industrial research laboratories in the third to fifth years of their careers, following doctoral/postdoctoral studies.

Events presented in the Dr. Frederica Darema Lecture Series in Computer Science are open to students, faculty, researchers, and others interested in learning about the latest research in computer sciences. 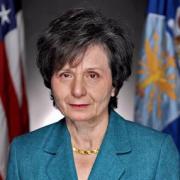 Dr. Frederica Darema (M.S. PHYS ’72) is a Greek American physicist, with a career that has spanned physics, and computer and computational sciences. In 1984, she proposed the Single Program, Multiple Data (SPMD) programming model, the predominant model for supercomputing over the last 35 years. She proposed the Dynamic Data Driven Application Systems (DDDAS) computational paradigm in 2000. For her scientific contributions, she was elected as an Institute of Electrical and Electronic Engineers (IEEE) Fellow in 2004.

Darema earned her B.S. degree from the School of Physics and Mathematics of the University of Athens - Greece, and M.S. and Ph. D. degrees in Theoretical Nuclear Physics from the Illinois Institute of Technology and then the University of California at Davis, respectively. She attended Illinois Tech and UC Davis as a Fulbright Scholar, and was also a Distinguished Scholar at UC Davis.

Darema joined the National Science Foundation in 1994, where she served in executive level positions and led the New Generation Software and Dynamic Data Driven Application Systems programs. From 1996-1998 she completed an assignment at the Defense Advanced Research Project Agency (DARPA). She recently retired as SES Director of the Air Force Office of Scientific Research, where she led a staff of 200, PhD scientists and engineers, and administrators, in managing over half-billion dollars of research funding.

In current times, data is considered synonymous with knowledge, profit, power, and entertainment, requiring development of new techniques to extract useful information and insights from data. In this talk, I will describe some concepts and techniques in interpretable data analysis from the viewpoint of a database researcher. First, I will talk about our work on explaining query answers, in terms of "intervention" or how changes in the input data changes the output of a query, and "context" or how input data not contributing to the answers of interest can help explain them.  Then I will talk about true causal inference from observational data without randomized controlled experiments and how database techniques can

Bio:
Sudeepa Roy is an Assistant Professor in Computer Science at
Duke University. She works in the area of databases, with a focus on foundational aspects of big data analysis, which includes causality and explanations for big data, data provenance, probabilistic databases, and applications of database techniques in other domains. Prior to Duke, she did a postdoc at the University of Washington, and obtained her Ph.D. from the University of Pennsylvania. She has served on the program committees of a number of premier conferences and workshops including SIGMOD, VLDB, PODS, and ICDT. She is a recipient of an NSF CAREER Award and a Google PhD Fellowship in Structured Data.

The ability to automatically understand what is perceived in visual data is in increasingly high demand. However, despite tremendous performance improvement in recent years, state-of-the-art deep visual models learned using large-scale benchmark datasets still fail to generalize to the diverse visual world. In this talk I will discuss a general purpose semi-supervised learning algorithm, domain adversarial learning, which facilitates transfer of information between different visual environments and across different semantic tasks thereby enabling recognition models to generalize to previously unseen worlds, such as from simulated to real-world driving imagery. I’ll also touch on the pervasiveness of dataset bias and how this bias can adversely affect underrepresented subpopulations

Judy Hoffman is an Assistant Professor in the School of Interactive Computing at Georgia Tech. Previously, she was a Research Scientist at Facebook AI Research. She received her PhD in Electrical Engineering and Computer Science from UC Berkeley in 2016.

Launching a Cybersecurity Startup: The Making of Kenna Security