In addition to participating in a wide range of research projects at nearby Argonne National Laboratory and Fermi National Accelerator Laboratory, faculty from Illinois Tech’s Department of Physics conduct research in elementary particles, condensed matter, superconductivity, and experimental and computational biophysics. 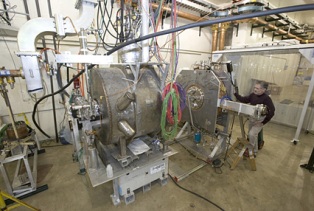 The Muon Accelerator Program (MAP) was created in 2010 to unify Department of Energy-supported research and development in the United States and to develop the concepts and technologies required for muon colliders and neutrino factories.

These muon-based facilities have the potential to discover and explore new exciting fundamental physics, but will require the development of demanding technologies and innovative concepts. MAP aspires to prove the feasibility of a muon collider within a few years, and to make significant contributions to the international effort devoted to developing neutrino factories.

It is the goal of the international Muon Ionization Cooling Experiment (MICE) to establish the feasibility of ionization cooling for muons, to build a section of an actual cooling channel, to measure its performance in various configuration, and to develop and test all necessary software. MICE is implemented in steps, with each step adding more crucial components and allowing for more essential studies.

Tim Morrison’s research interests include X-ray (synchrotron radiation) absorption spectroscopic studies of disordered materials, particularly catalysts and alloys, as well as research and development of novel X-ray optical components and sources. In addition, Morrison is working on a means of easing the transition from high school to university-level science courses.

Superconducting radio frequency (SRF) cavities, having surface impedances orders of magnitude lower than normal metals such as copper, are an enabling device for a host of particle accelerator applications such as the Large Hadron Collider and the Spallation Neutron Source (SNS). SRF cavities are currently made of elemental niobium, and there is a need to understand how the various processing steps (deep drawing, acid etching and polishing, vacuum annealing, and high-pressure water rinsing) affect the cavity performance. Since the radio frequency currents occupy a thin surface layer (~45 nm), research and development has focused on surface analysis of niobium.

This Illinois Tech group has developed two new surface probes for SRF cavity research. Using Raman microscopy/spectroscopy, along with density functional theory and transmission electron microscopy, they have identified surface patches containing excess carbon in the form of amorphous graphite, chain-type hydrocarbons, and nanoscale precipitates of NbC. A new plasma cleaning process at SNS removes carbon and hydrocarbons and leads to improved performance. In collaboration with Argonne National Lab, they have developed point contact tunneling spectroscopy to probe the local superconductivity on the surface. They have discovered surface magnetism in regions with degraded performance that appears to originate in the native oxide. 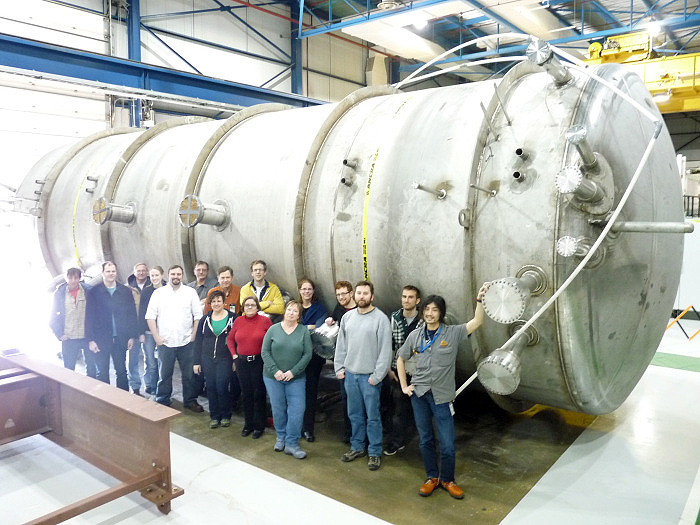 The Fermilab Short Baseline Neutrino (SBN) program, like PROSPECT, aims to probe the existence of nonstandard neutrino oscillations. This is accomplished at SBN by searching for the appearance of electron neutrinos in the muon neutrino-dominated Booster Neutrino Beamline at Fermilab utilizing detectors at three different locations along the beamline. The detectors are liquid argon time projection chambers (LArTPCs), which produce 3D digital images of neutrino interactions with unparalleled mm-scale precision. In addition to its oscillation physics goals, SBN will provide new measurements of neutrino-argon interaction cross sections, and help develop LArTPC detection experience and infrastructure, both of which are vital to the Deep Underground Neutrino Experiment, the community’s future-centerpiece long-baseline neutrino oscillation effort. Illinois Tech is involved in the design and construction of the MicroBooNE and SBN detectors as well as in the oscillation analyses for these detectors. 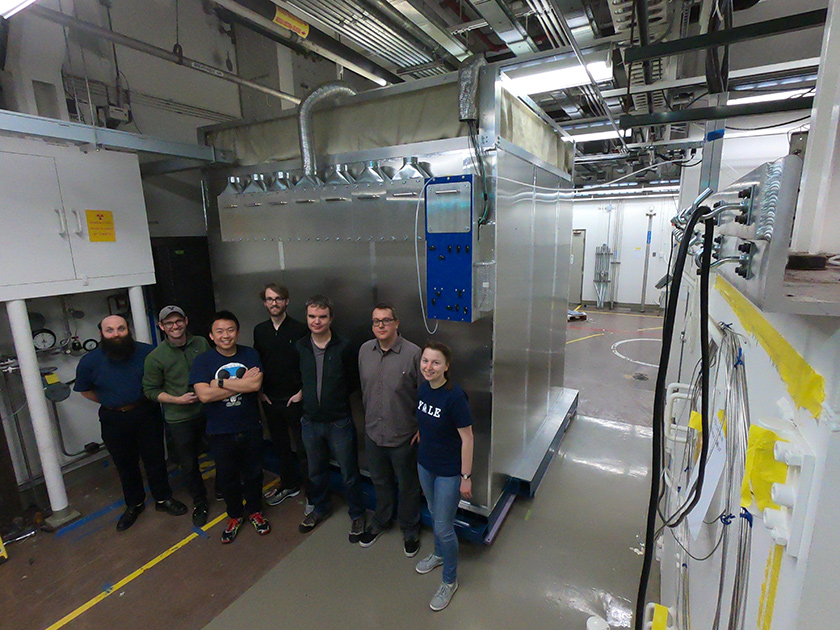 PROSPECT is designed to produce similar measurements of distance-dependent variations in reactor antineutrino detections, but at meter-scale distances. These short-baseline oscillations would indicate the existence of new neutrino states not predicted by the Standard Model. To probe this behavior, PROSPECT will place a moveable three-ton segmented scintillator detector at 6–12 meter distances from the highly enriched High Flux Isotope Reactor at Oak Ridge National Laboratory in Tennessee. In addition, PROSPECT’s measured antineutrino energy spectrum, which is produced entirely by fission of the isotope U-235, will provide new constraints on reactor models complementary to Daya Bay’s. To achieve these goals, PROSPECT must demonstrate precision on-surface detection of reactor antineutrinos, a major stepping stone in the development of viable antineutrino-based reactor monitoring technology. The Illinois Tech group is leading the neutrino oscillation analysis effort for the experiment, and is in charge of the design and production of the detector’s segmentation system. 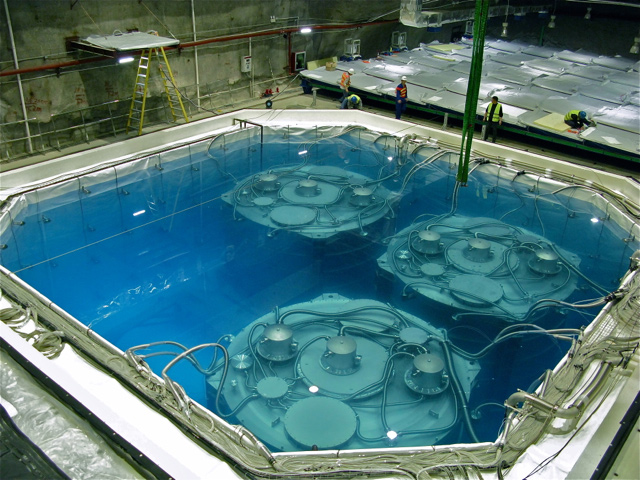 The Daya Bay Experiment utilizes antineutrinos from a nuclear reactor complex in Shenzhen, China, to measure the neutrino mixing angle θ13, which may be defined as a parameter that describes the extent to which the electron neutrino can oscillate into the other kinds and is a key step to measuring the neutrino/antineutrino difference. Daya Bay scientists, along with scientists from four other experiments investigating neutrino oscillation, were awarded the 2016 Breakthrough Prize in Fundamental Physics for the first unambiguous measurement of this parameter, which was achieved by measuring relative differences in antineutrino interaction rates between detectors at ~500 and ~1,650 meters standoff from Daya Bay's reactor cores. In addition to improving precision on θ13, ongoing Daya Bay and Illinois Tech efforts will produce measurements of the reactors’ antineutrino flux and energy spectrum, which are valuable for new physics searches and applied reactor modeling and monitoring purposes. 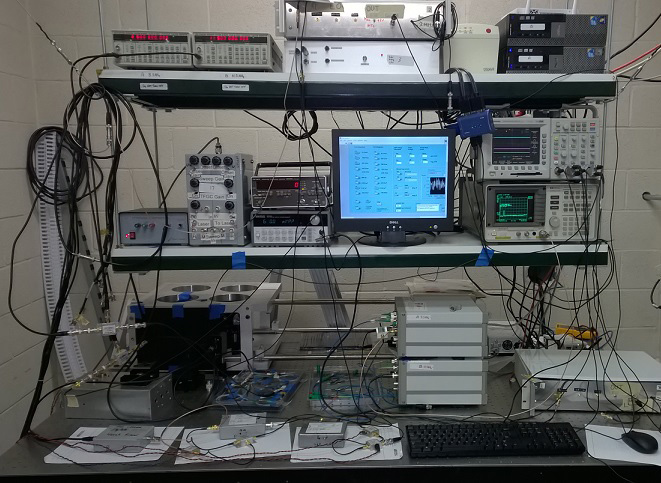 This group is testing the Weak Equivalence Principle, which underlies the theory of general relativity and hence our models of the universe, using apparatus from the Harvard-Smithsonian Center for Astrophysics. This includes the G-POEM vertical bouncer system, putting two dissimilar masses into free fall, and a semiconductor-laser tracking frequency gauge (SL-TFG) to monitor the distance between the masses to a precision of fractions of a picometer.

The SL-TFG also enables a unique measurement of antimatter gravity using muonium atoms produced in a beamline at Switzerland’s Paul Scherrer Institute, the world’s leading center for muonium research. The group is collaborating with them and the Argonne Center for Nanoscale Materials to develop a precision cryogenic interferometer that can make picometer-scale measurements of the gravitational displacement of the muonium beam. [Above: Illinois Tech Picometer Laster Metrology Lab] 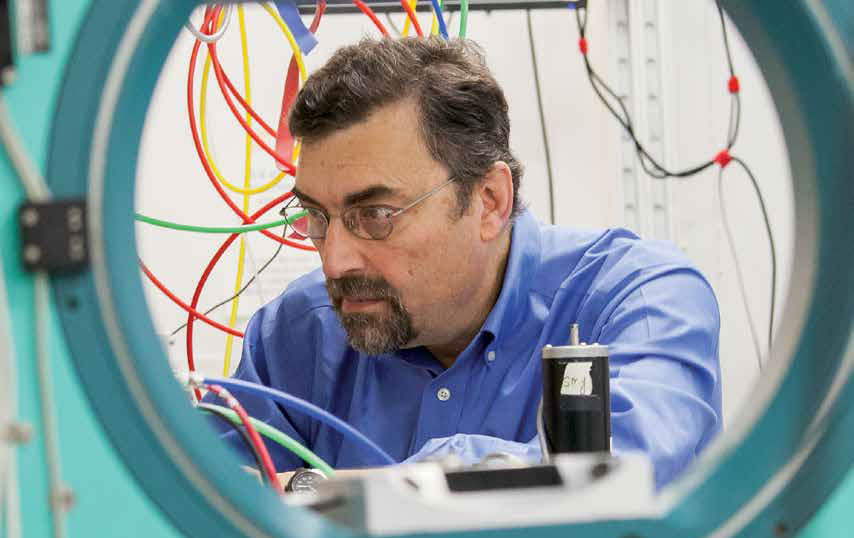 Electric vehicles are dramatically changing the way people move from place to place, ushering in an era of cleaner transportation. But according to Carlo Segre, Duchossois Leadership Professor and physics professor at Illinois Tech, there is still one big hitch—the distance such vehicles can travel before needing to be recharged.

Segre says that the more affordable electric vehicles today can travel approximately 100 miles on a single charge and for some drivers, this presents what he refers to as “range anxiety”—a predicament Segre hopes to address through his research.